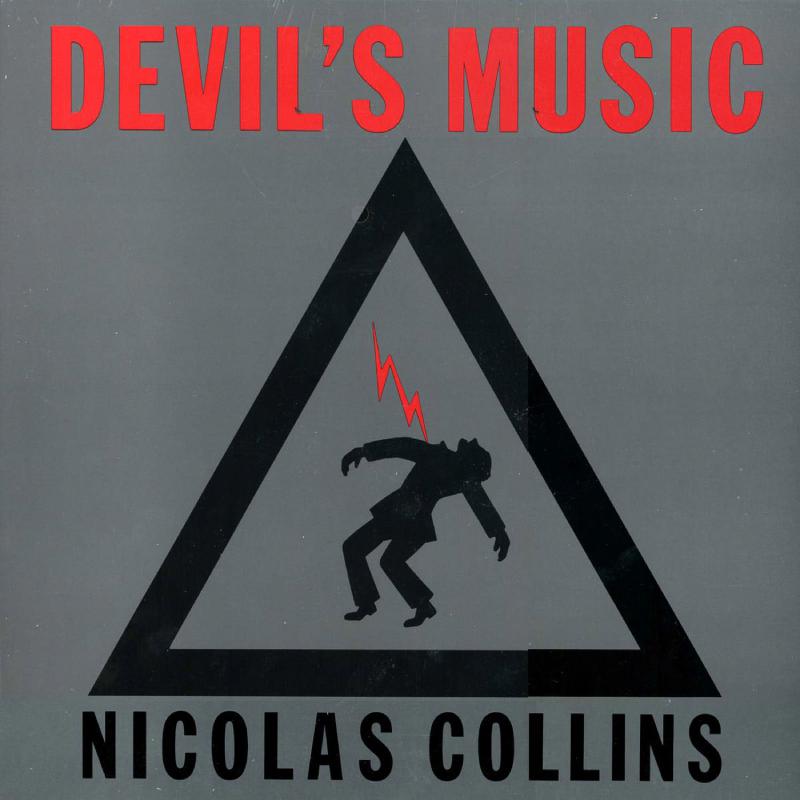 Nicolas Collins is an American-born composer, educator, and electronics designer whose career comprises more than 35 years of innovative electronic music. He studied under Alvin Lucier, and pioneered the practice of "circuit bending", or the hacking of affordable electronic devices to expand their sonic and compositional capabilities. With the advent of cheap micro-circuitry in the early 80s, Collins built on the "cybernetic" performance schemes of early electronic composers like David Tudor and Gordon Mumma to devise new, alien forms of live composition via humble means.

Devil's Music is Collins' third LP, released in 1985 on Trace Elements, a newly-established imprint for the rock-adjacent avant-garde of New York City's burgeoning downtown scene. The concept of the record is simple. The album's single sound source is a portable AM/FM radio, fed through 3 commercially available sample/delay units, and mixed live via a handmade controller.

The result is a tumbling, confounding torrent of liminal sound, the simplicity of the musical premise immediately subsumed by the jarring, manic energy inherent in pulling audio material out of the mass-media ether. The live sampling of radio sources tie the technique to the time and place, creating a perfect time capsule of 80s downtown, in both its street-level energy and posh mundanity. Astute listeners will hear unmistakable snatches of Shannon's Let the Music Play and Fat Boys-esque beatboxing, braided together with flatly-delivered advertising copy and AM-filtered easy listening. To my ears, the cross-brow bricolage perfectly describes the spiritual connective tissue between the hi-fi studio wizardry of Art of Noise and the pastiche of contemporary bedroom loopers like James Ferraro.

The hard-cutting, sample-obsessed aesthetic of early hip hop was an explicit influence on the conception of the piece, but it's Collins' process-music execution, relying on chance operations over explicit sequencing or virtuoso flare, that makes the result so strikingly hypnotic. While many studio pirates were deconstructing the grim media landscape during the same period (think the politically-charged culture-jamming of On-U Sound or Death Comet Crew), the dizzying effect of Devil's Music makes the same kind of comment in a way that's perhaps even more viscerally unnerving.

I would love to hear a version created with today's radio-replacements, I can only imagine the pleasantly dissociative effects of chopped-up millennial whoops, pop drops, and ads for smart doorbells :)

Grip the entire album, plus bonus materials and extensive liner notes for free direct from Collins himself.